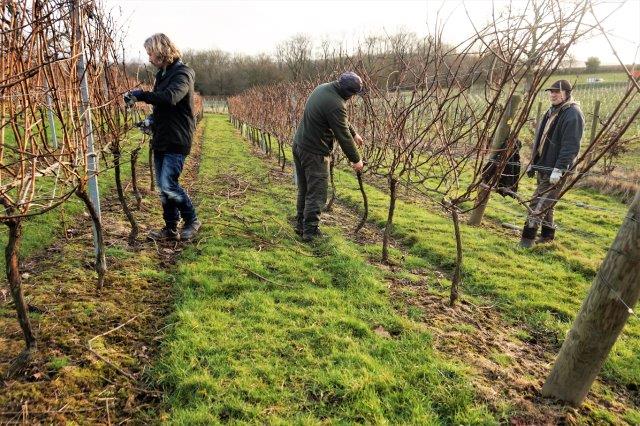 Work in the Vineyards goes on Whatever the Weather

Mention the word 'vineyard' and a vision immediately appears of neatly tended rows of vines, with luscious green leaves and large bunches of developing grapes, bathed in warm sunshine on gently rolling hills. For most of us, when we visit a vineyard, that is what we expect to see, simply because most vineyard visits take place in late Spring, Summer or possibly early Autumn. However, visit a vineyard in the depths of January or February, and a very different picture arises. A muddy field with row upon row of bare sticks and tangled masses of canes, tied to wires and wooden posts.

The life of the vineyard and the work associated with it carries on, of course, throughout the seasons. Winter is the critical time for pruning the vines and the daunting task of cutting the mass of bare canes back to just one or two canes per vine for this season's crop, with a couple of small 'spurs' left ready for next year. The pruning methods can differ in other wine regions and countries, but the English vineyards normally adopt the method mentioned above. The work has to be done rapidly, since there are several thousand vines in a vineyard, all of which have to be pruned before the growing season begins - normally sometime in March.

“The task of vine pruning is arguably the most important work of the vineyard, since the next crop of grapes is entirely dependent on what is done at this stage” commented Josh Hammond , winemaker at the Sussex Vineyard of Blackdown Ridge, south of Petworth. The decision as to how the vines are pruned is normally a result of discussions between the vineyard manager and the wine-maker and often different grape varieties will be pruned in different ways on the same wine estate. Vines are very vigorous growing plants and a mass of last year's growth has to be cut-off, leaving the one or two fruiting canes, with a certain number of buds per cane, each of which will hopefully produce some grapes. The growth of the vines is restricted in this way in order to produce better quality grapes with greater concentration of flavour in the grapes and the resultant wine.

Vine pruning is thus a skilled job and carried out by small teams of experienced pruners, under the direction of the vineyard manager. The cut canes are then stripped out by unskilled workers and in some cases, such as at Blackdown Ridge Estate, they are mulched back into the soil as a form of natural fertiliser. Except in hard frost, the pruning carries on regardless of the weather - uncomfortable sometimes, yet vital for the next vintage.

The vineyard in winter is thus full of activity, in contrast to the winery, which is relatively quiet. During these months, the wine is generally resting after fermentation and before bottling. Any solid matter in the vats settles out and the clear wine is racked off into other tanks, ready for any clarification (fining) which may be necessary. Another transformation may also be happening quietly in the vats of wine. This is the process of Malolactic Fermentation, which takes place after the Alcoholic Fermentation, where yeasts work on the sugar in the grapes to produce alcohol. The Malolactic Fermentation does not produce alcohol, but transforms malic acid (Apples?) into Lactic acid (Milk?), creating a softer acidity in the final taste of the wine. The process requires some warmth and thus happens spontaneously in warmer climes. In the UK, it may happen in the Spring, or be induced by slightly warming the wine during the winter months.